Welcome to The Crew's Story page! • Find out the fate of each crew member • See a contemporary newspaper article about the raid

There were 10 crew members aboard my dad's B-17 when the raid on the airdrome at Gerbini, Sicily began on 5 July 1943. When the day ended, five members of the crew would be dead; one would be hospitalized with severe head wounds, a bullet wound to the leg, and other injuries to the body; another would be crippled for life; two others would be hospitalized for their wounds. All five of the survivors would be prisoners of war.

Gerbini was the headquarters of the Luftwaffe Air Division III. The raid of July 5 was part of the preparation for the invasion of Sicily that would begin on July 10.

The configuration of the crew on the B-17 was 5 men in front of the bomb bay and 5 men behind it. Those in front were the Pilot, Copilot, Navigator, Bombardier, and the Engineer/Top Turret Gunner. Those behind were the Radio Operator, Ball Turret Gunner, Left Waist Gunner, Right Waist Gunner, and Tail Gunner.

The crew picture shows 9 men. The 10th man was added after the picture was taken.

The Fate of Each Crew Member 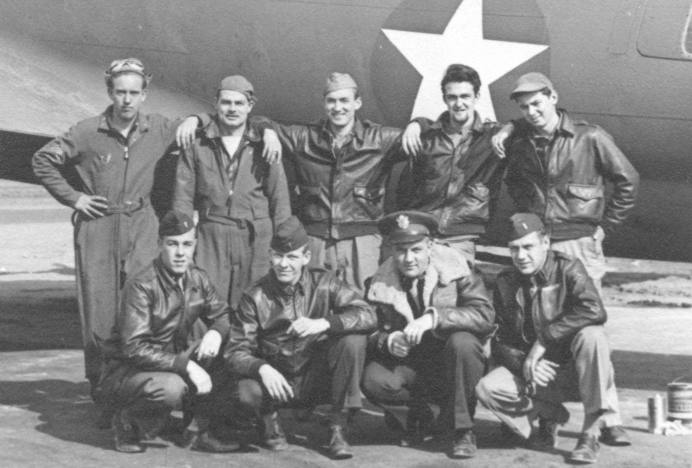 Survived the Gerbini raid. Suffered a rib injury while parachuting from the aircraft. Was in the same Sicilian hospital as my father. My father reported last seeing him on a prisoner train in Italy on 31 August 1943. William Craton reported he was held in Stalag 3A at Moosburg, Germany, for 2 years. William Craton also said he last saw him at Stalag 7A near Munich, Germany. His widow reported he was held at Stalag Luft III. He was killed at Godman Air Base, Kentucky, in 1947 when his T-6 trainer was hit from behind by another aircraft.

Killed at Gerbini when the aircraft exploded. Stayed aboard as long as there was a chance of anyone in the crew getting out. He is buried in grave E-267 in a group burial at Zachary Taylor National Cemetery, 4701 Brownboro Road, Louisville, KY.

Killed at Gerbini. Was without a scratch while waiting to exit the aircraft when it exploded.

Member of crew when the aircraft was ferried to Africa. Possibly replaced later by Bostoni, who was replaced by Lavine on the Gerbini mission.

Shot down 4 enemy fighters during Gerbini raid. Sustained a severe head wound and other wounds to the body when the aircraft exploded. Wounded in right leg by a fighter firing at him while he parachuted from the plane. He met my father in Stalag 17. After discharge from the Army Air Forces in 1945, he re-enlisted in the USAF in 1947 as a SSgt. He eventually received a field promotion to Lieutenant and retired as a Major. Last living member of the crew. I received an audio tape from him on October 4, 1994. He reported that he was 71 years old and in good health. Mr. Craton was reported in the Atlanta Journal-Constitution to have died Saturday, May 24, 2008 at age 84. He is buried at Powder Springs Memorial Gardens Cemetery, Powder Springs, GA. Hear his spoken account of the fighting when the plane was shot down, by clicking here.

Shot down 5 enemy fighters during Gerbini raid. My father saw him in Austria (probably at Stalag 17B) in 1945. He died January 21, 1969 and is buried at Central Wisconsin Veterans Memorial Cemetery, Wisconsin Veterans Home, N2665 County road QQ, King, WI.

Shot down 2 enemy fighters during Gerbini raid. He was wounded in both legs by shrapnel. He may have been in the same Sicilian hospital as Lt. Drueding. He last saw Lt. Drueding on a prisoner train in Italy. Held in Italian and German POW camps for 2 years. Met William Craton at Stalag 17 in late 1944. Last saw William Craton and Harold Yorton on a prisoner march in Austria in April 1945. He died November 1978 from lung cancer. He is buried at Palm Eastern Mortuary & Cemetery at 7600 S. Eastern Ave., near Las Vegas, NV. See his War souvenirs by clicking here.

Killed at Gerbini when his parachute got caught on the horizontal stabilizer and he could not work his way free. He is buried in grave E-267 in a group burial at Zachary Taylor National Cemetery, 4701 Brownboro Road, Louisville, KY.

Seriously wounded at Gerbini. Unable to evacuate from the aircraft. My father and possibly others threw him out of the door. He was repatriated to the U.S. due to his wounds. His wounds caused him to be paralyzed from the waist down. He died of a massive heart attack in March, 1977, per March, 1984, 99th BGHS Newsletter.

Killed at Gerbini when the aircraft exploded.

Because Lt. Lavine was not part of the original crew, he does not appear in the crew picture. However, this image was made available through the help of a niece and nephew.

Killed at Gerbini. Was added to crew as 10th man after bomb missions started. Was supposed to be Left Waist Gunner, but my father assigned him to the Radio Operator's gun position. He was directly behind my father when my father bailed out. He is buried in grave E-267 in a group burial at Zachary Taylor National Cemetery, 4701 Brownboro Road, Louisville, KY.

That Fateful Day – A Contemporary Report

Read a contemporary newspaper report of the 99th Bomb Group and the events of July 5, 1943. The report, filed July 6, tells of the bombing raid, the German fighter attacks against the B-17s, the courageous fight of the B-17 crews, and how the crews of the three downed B-17s were "still firing away when their planes were burning all around them." The report was taken from the September 1, 1988 edition of the 99th Bomb Group Historical Society newsletter, page 38. Click here to read the article.

The Back of the Crew Picture

Some of the information offered here was found on the back of the crew photograph. Written in my mother's hand, it was apparently written from my father's dictation. You may view those notes by clicking on the photograph below.