Welcome to the Bangkok's Wat Po and Royal Barges page! • See the interesting sights at the large Buddhist temple called Wat Po • A curious statue • Then see pictures of the king's royal barges

Wat Po is a very large Buddhist wat (temple), perhaps the largest, located in Bangkok along the shore of the Chao Phraya River. These are some sights from this interesting place. This very large pagoda, located on the grounds of Wat Po, is seen from the Chao Phraya River, the main river of Bangkok. Pagodas are burial sites, often for kings.

I don't know whose pagoda this is. Also, I don't know if the scaffolding surrounding the pagoda indicates that it is being built or is being refurbished.

There are many smaller pagodas at Wat Po. However, the "small" ones are often two stories high.

Marco Polo was the historic Venetian traveler who, during a journey of 26 years, lived in Cathay (China) for twenty years.

Marco, his father Nicolo, and his uncle, Maffeo, had left their home when Marco was a boy of 17. They returned when Marco was middle-aged, about the year 1295. During the intervening years they lived a remarkable adventure. They met Kublai Khan. They became wealthy. Marco rose to become the governor of Hangchow.

The story of Marco Polo must have been legendary since he is depicted in this Thai statue even though he never traveled to the land that is now Thailand. This statue stands on the grounds of Wat Po near a gate. In contrast to the very large pagoda at the top of this page, these are quite small. A sense of scale can be judged based upon the presence of the head and shoulders of my friend, Curt Smith, in the lower right corner.

There are many, many pagodas on the grounds of Wat Po. The ones seen here are among the smallest.

There are maybe 50 of these Buddhas in this location, some of which are not seen in this view. Each was contributed by a benefactor, typically a government official such as the police chief. 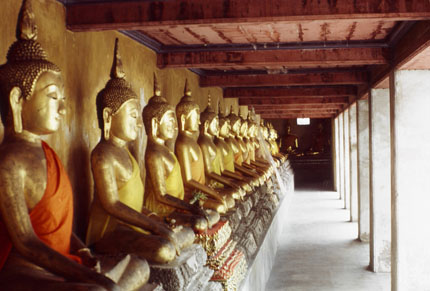 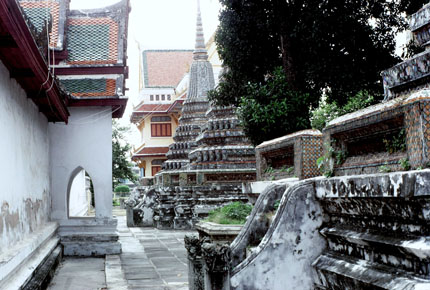 This was a quiet area without much foot traffic. I thought scene was appealing. This is perhaps the most peculiar sight at Wat Po. I will tell you about it as a guide explained it to me.

What you see here is a phallic symbol carved in stone. As I recall, it was about four feet tall and maybe one foot across. It sits on a rock-like platform, some of which can be seen in this photograph.

I was told by my guide that barren women would come here and sit on this figure while praying to Buddha. If the woman later conceived a child, she returned and placed a piece of gold leaf at the top. The pieces of gold leaf seen here appear to attest to some measure of success for the ritual.

If you are unfamiliar with gold leaf, it is a small square of pure gold, maybe 3/4-inch square and only molecules thick. It is often used to give building domes and roofs, statuary, and other items a bright gold appearance. A piece of gold leaf is very delicate and must be handled with the greatest care to prevent it from disintegrating. Guides and others often hand out pieces of gold leaf to visitors. The gold leaf is held in a simple fold of paper.

The glare from the doorway confuses the image slightly, but the white patches along the lower leg of the statue are areas where the gold leaf needed to be reapplied. Once each year the king sails one of his extravagant barges along the Chao Phraya River to Wat Po. Since this is an official state event, and the Thai king is highly respected, it is a serious ceremony. While I did not witness the king's barge arriving at the wat, I was able to visit the warehouse or dry dock where the barges are housed. These images show some of what I saw. 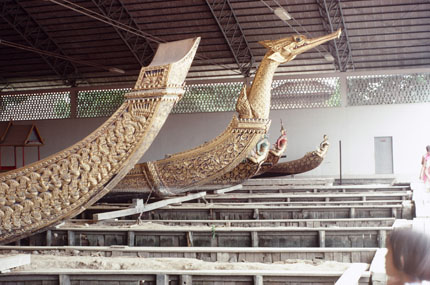