Welcome to A Buddhist Festival page! • See the people as they walk and dance into the village • The people dance along the village streets • The Buddhist compound • The GIs get treated in grand fashion • We all had fun

I was invited by my hootch girl, Malee, to go to a Buddhist festival. This was a great honor because only a half-dozen or so airmen had been invited.

We airmen and maybe 40 Thais took buses away from Korat to a town where a Buddhist compound was located. The buses stopped outside of the town. Everyone stepped out of the buses and walked into town. Once there, the Thais began parading and dancing through the town to the Buddhist compound.

Walk from the Buses & Dance through Town 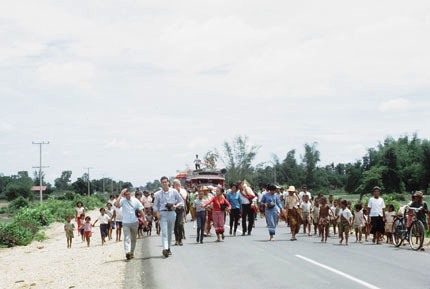 The buses in the background have dropped us all off and the whole group is now marching toward a little village. They will dance and march through the village on their way to a Buddhist compound.

Notice how few GIs there are in the group. Two can be seen toward the left wearing blue and khaki and carrying cameras. The fact that so few GIs were invited made me feel honored that I was one of them.

As viewed from the buses, the group marches toward the village. 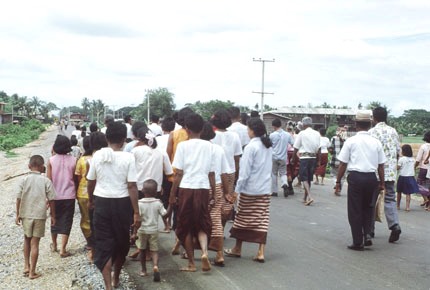 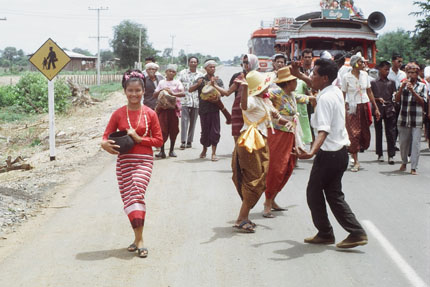 My hootch girl, Malee in the red dress and all smiles, dances toward the village.

I don't know who that rabble is behind her.

Malee encountered her mother in the village. It's clear from her expression why Thailand is called The Land of Smiles. 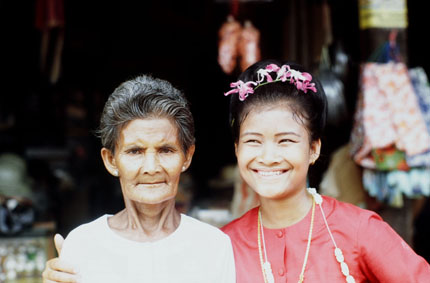 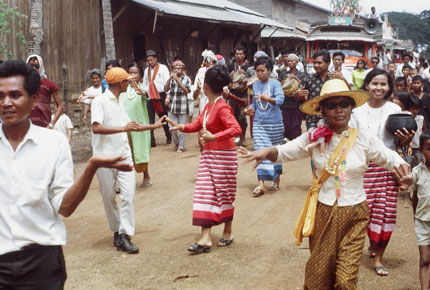 Here Malee in the red dress is dancing along the street with another of our hootch girls behind her in the blue dress.

Another group dances through town. 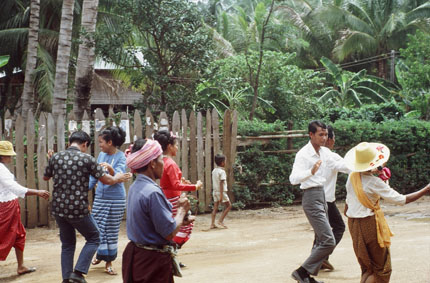 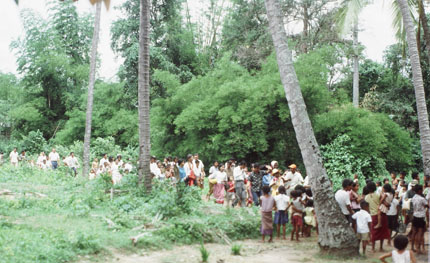 Everyone has passed through the town. They are now approaching the compound.

Inside the Buddhist Compound 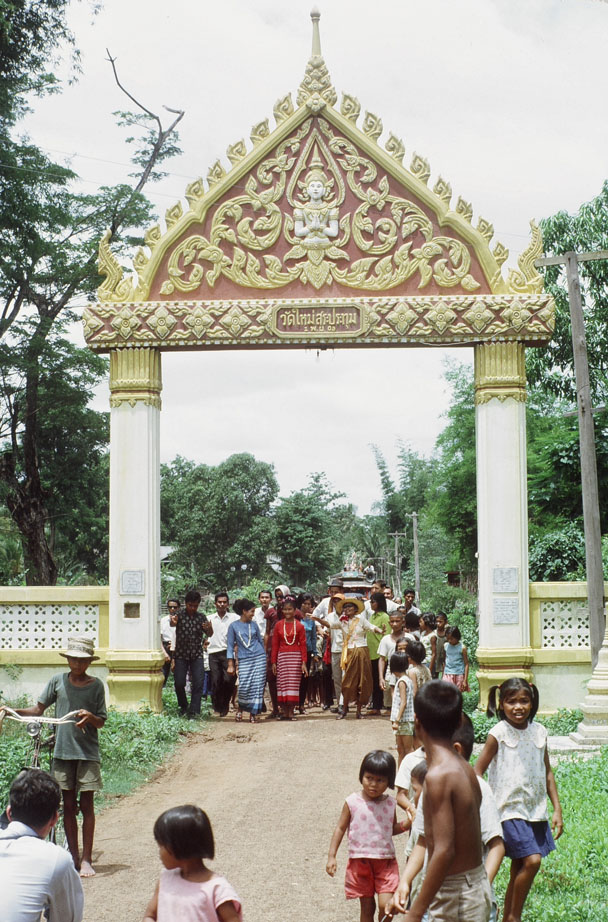 At the Gate of the Compound

The Thai people who participated in this Buddhist festival treated the GIs as honored guests. They could not have been more concerned for our comfort.

Here I was amazed that they
stopped their dancing and parading just so we could snap pictures. Only when we signaled that we were done did the procession move on and everyone came through the gate.

After everyone had entered the compound, all of the GIs were invited to sit on benches that were formed in a circle. There were maybe a half-dozen of us. We were each handed a soda pop. Some Thai music was then played and the lady seen here began dancing a traditional Thai dance inside the circle as the rest of the people looked on.

The woman then coaxed each GI, one at a time, to participate in the dance with her. You can see one of us dancing with her here. I don't know who this guy was. (I didn't know any of the GIs in our group.) Of course, all of us felt uncomfortable doing this but it seemed like the polite thing to do. The people who watched appeared to get a big kick out of us feeling so self-conscious.

Malee, her brother, and me 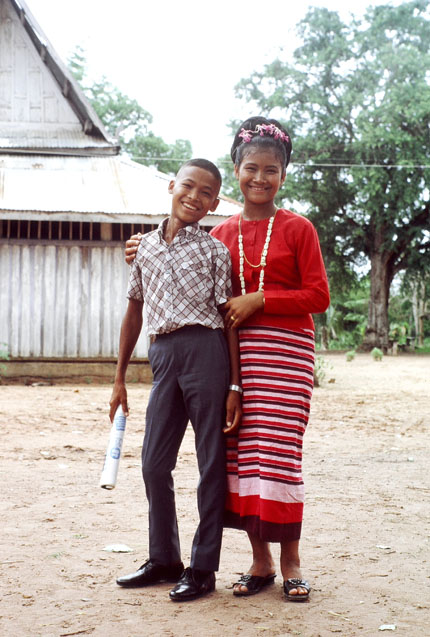 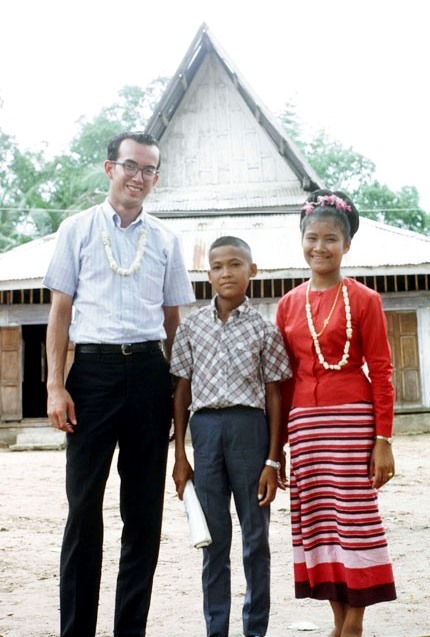 Once all of the fanfare was concluded, it was time to eat. Everyone eventually went to the top floor of this large teak building. Some can be seen on the porch. Some monks can be seen in the windows at the left.

When we were inside, we sat on the floor in groups. We were served chicken (sliced haphazardly, through the bone) and soda pop. I was also served rice beer. Rice beer looks like milky water with a few pieces of rice floating in it but it smells and tastes like beer.

There was a small stage at one end of the large room where we ate. The stage stood maybe one foot above the floor. While Thai music played, a number of the people got up and danced on the stage, apparently for everyone's entertainment. For better or worse, somewhere along the line, all of the GIs were asked to get up as a group and dance.

Now, traditional Thai dancing, with the turns of the head and the motions of the hands, strikes me as being somewhat effeminate. It's pleasant to watch when women are doing it but I think the guys have to know exactly what to do to carry it off without appearing to look like the women. Well, none of us GIs knew what we were doing. So to the delight of everyone—except us—we made fools of ourselves trying to do that dance. Malee, my hootch girl, got a big laugh out of our "performance."

My hootch girl, Malee, can be seen wearing a red blouse and striped skirt near the front of this crowd at the left. 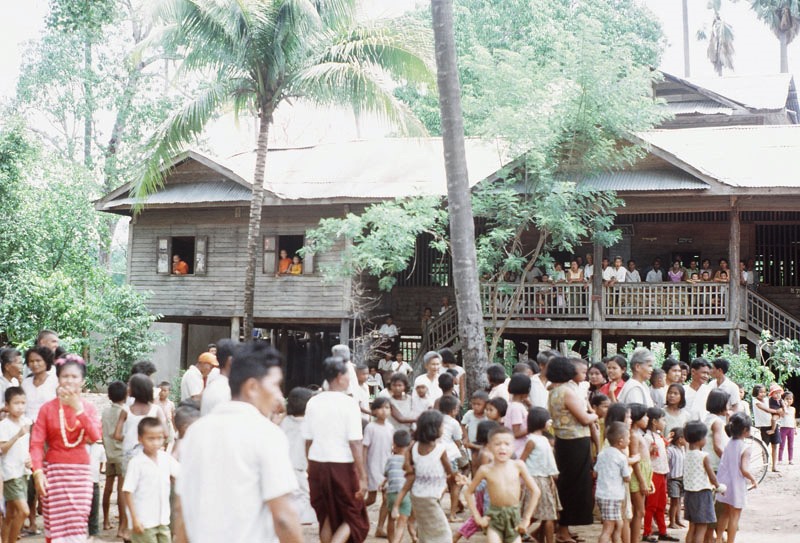