Welcome to The Raid on Gerbini page! • See details of the fateful raid against Gerbini, Sicily on 5 July 1943 • See the flight path • Find out about important locations and events that day • See an official map showing where the three B-17s were shot down • Read official eyewitness accounts

At 8:07 a.m. on Monday, July 5, 1943, 27 B-17s of the 99th Bomb Group left Navarin Field, Algeria for a raid on the German-Italian airdrome at Gerbini, Sicily. For three of those B-17s and their crews, this was to be the final mission. Those three B-17s were shot down as they approached the target. The devastating attack by 100 enemy fighters cost the lives of some of the crewmen and resulted in the captivity of the others.

This page shows the flight path of the 99th together with the planned times and altitudes at each waypoint. The time at Navarin Field is the actual take-off time. The planes headed nominally east until they were 30 miles north of Valleta, Malta, where they turned roughly to the north and were met by about 60 British Spitfires that would escort them to the target.

The group passed over the southern coast of Sicily at Punta Secca, then flew north to Raddusa, the Initial Point. There they turned onto a course of 105 degrees to begin the bomb run on the airdrome at Gerbini. The Initial Point (the IP as the airmen called it) was the point where the bombardier took over control of the aircraft from the pilot.

Colors are used in the figure that follows to enable easy reference to the text that describes each of the cited locations. Yellow indicates key points along the flight path. Unique outlines distinguish two important points along that path.

The three planes that were shot down were piloted by Devane (my dad's crew), Davis, and Graham. Where crew member names are included, the name of their respective pilot is included in parentheses. Members of the Devane crew are named without a parenthetical reference.

Where the Planes Went Down

Missing Air Crew Report 1133 contains contemporary reports related to the aircraft and crews that were shot down over Gerbini on July 5, 1943. The image shown here is a hand-drawn map from that MACR. A larger version of this image is available by clicking on it.

Gerbini is clearly marked at the left. Immediately northwest of Gerbini are three marks with numbers. The numbers are the last three digits of the tail numbers of the aircraft that were shot down. The marks represent the approximate positions of the three B-17s as last seen by crew members aboard other B-17s on that raid. The numbers shown in the image are 492, 486, and 483, indicating 229492 (Graham crew), 229486 (Devane crew), and 229483 (A.E. Davis crew). 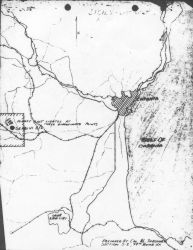 These reports are observations made by crew members who saw what happened to the planes that were shot down during the Gerbini raid. Larger versions of the statements are available by clicking on them. 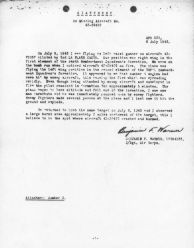