Welcome to the Thailand During Vietnam page! • See some of the sights On Base including pictures of the aircraft and the life of the airmen • See the sights Off Base including Korat and the infamous Bar Row • Pictures of Bangkok, a large Buddhist temple there, and the floating marketplace • The ruins at Phimai • See a parade on base and visit a Buddhist celebration away from the base

Per military.wikia.com:"During the Vietnam War, Korat RTAFB was the largest front-line facility of the United States Air Force (USAF) in Thailand from 1962 through 1975."

I was stationed at Korat Royal Thai Air Force Base, Thailand from October 1968 to October 1969. As an Aircraft Radio Repairman, I worked primarily on the flight line repairing the radio systems on F-105 fighter-bombers. F-4 fighter-bombers began to be stationed there shortly after my arrival.

This page is the introduction to the sights and experiences on Korat RTAFB, in and around the city of Korat, in Bangkok, and in Phimai. 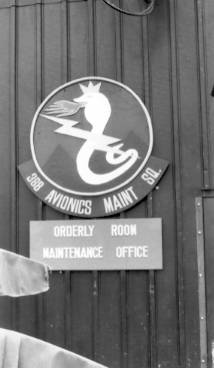 The building at the left housed the Comm, Nav, Doppler, Auto Pilot, Fire Control, and Inertial Nav shops. The center building contained the Orderly Room and the Maintenance Office. The building at the right housed Electronic Countermeasures. 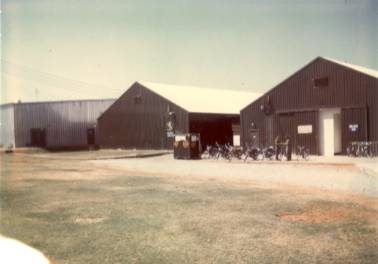 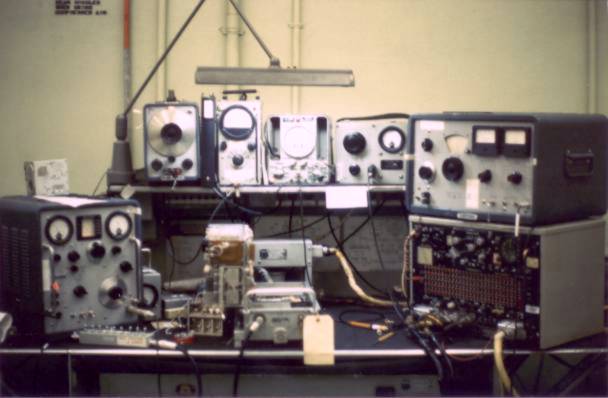 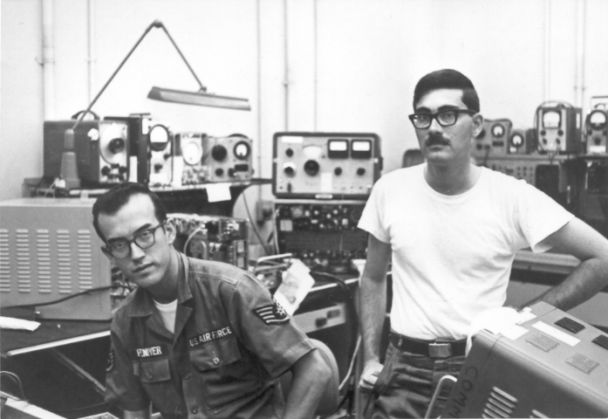 The upper picture shows an ARC‑70 radio with a tag on it. It's sitting on my bench where it's tilted open toward the left at a 90° angle for maintenance.

The ARC-70 was the UHF radio used by the F‑105. It was an awkward conglomeration of electron tubes, gears, and shafts. And, it was a sealed, airtight unit that was pressurized for altitude using a bicycle pump.

In the lower picture, Richard Hull is standing at the right and I'm sitting. Richard worked in the Inertial shop, also part of the Avionics Squadron.

The Comm Shop Roster is shown below. The Manning Status is shown at the right. Either image can be viewed in more detail by clicking on it. 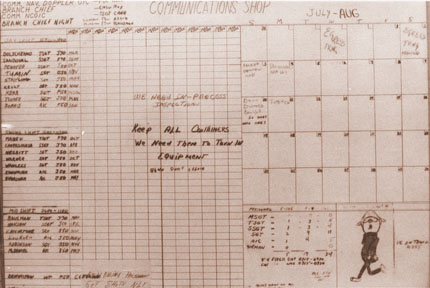 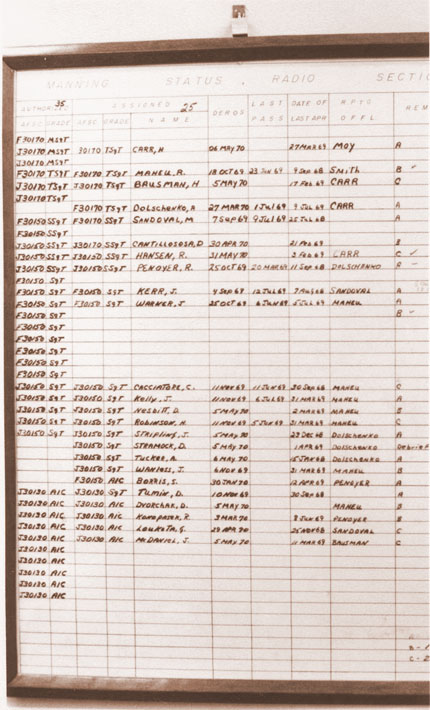 This road runs along the southern edge of the flight line. The view is looking southwest toward 388th Avionics, which, though not visible, is down the road and on the right. 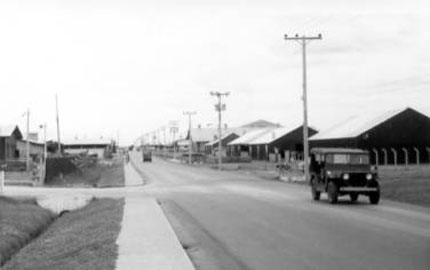 F-105 Thunderchief in a revetment 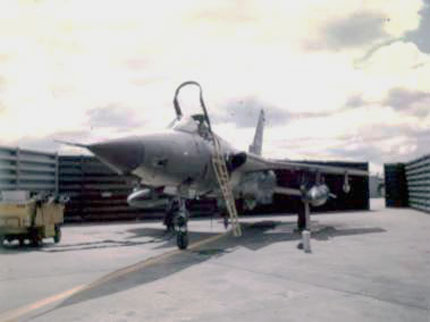 F-4 Phantom in a revetment 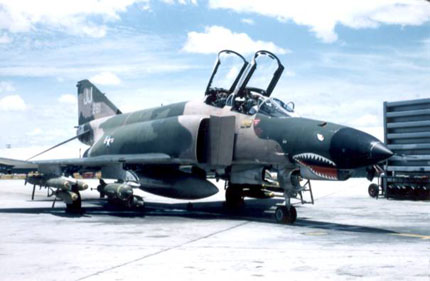 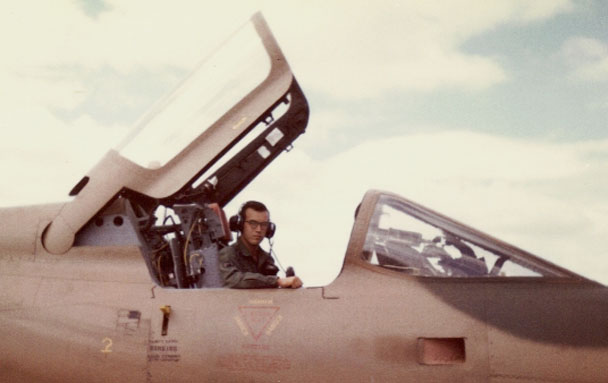 Here I am sitting in the cockpit of an F-105D working on the flight line as an Aircraft Radio Repairman. 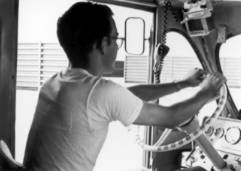 The driving job was rotated among the guys who rode aboard the Red Ball truck. On this day it was my turn. Our truck's radio designator was Orange 2. So when the maintenance dispatcher needed someone from Avionics to visit an aircraft, he might say over the radio, "Orange 2, go to slot 51 and see the crew chief." The term "slot 51" refers to "revetment number 51."

Red Ball was the on-the-spot troubleshooter and repair facility for aircraft that were about to taxi for a sortie. Sometimes we were dispatched to the staging area at the end of the runway. If an aircraft was scheduled to go on a mission and the pilot found an equipment problem, it was imperative to repair the problem immediately. Red Ball was called to fix these problems, typically with the aircraft engines running. As a result, only the top maintenance guys rode Red Ball. When there was no Red Ball call, the truck was used as a convenience to transport maintenance people and their tools and equipment between the aircraft and the shops. To link to another site and see a similar truck used by the AMS squadron, click Orange 4.

This happens to have been my hat but these hats were worn by many airmen in Thailand. It was common to use patches to indicate where you had been. I was stationed in Korat but I spent a month in Takhli in January 1969. Takhli was the only other F-105 base in Thailand. Many of us had to leave the base in January so that the runway could be repaved. It had been a Japanese base during WWII, and they built the original runway. But I've been informed that the runway was not paved before 1964 when America built Korat RTAFB. 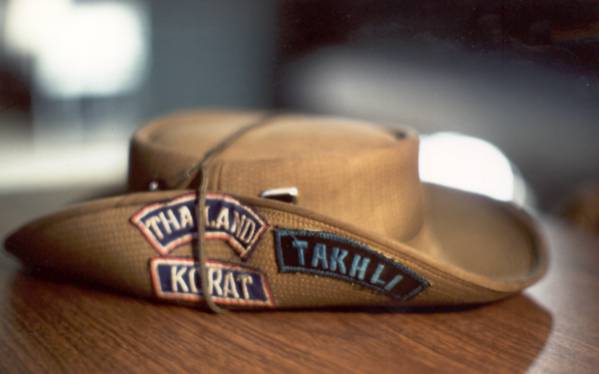 My original barracks. This picture was taken from the direction of the Sawadee Club (the airmen's club.) When I was promoted to SSgt, I had to move to the barracks that can be seen just to the left. 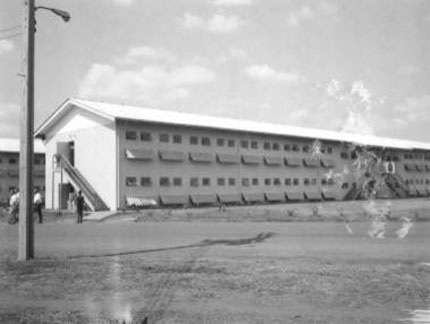 Here I am sitting near the foot of my bunk at a small desk (not visible) with my towel and locker. The clothes I'm wearing were tailored in town. I was probably ready to head into town. This picture was taken after making SSgt and after I moved to the new barracks. 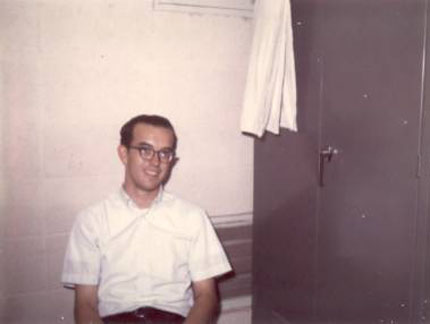 The view from the back of my barracks (away from the Sawadee Club.) The base swimming pool can be seen. The base movie theater is the large brown building that faces the road. The MARS (Military Affiliate Radio System) station is on the far side of the movie theater. A snack bar was located near the far corner of the pool and cannot be seen here. Sometimes the 2000-watt MARS signal would blast into the audio system at the movie theater and disrupt the movie. 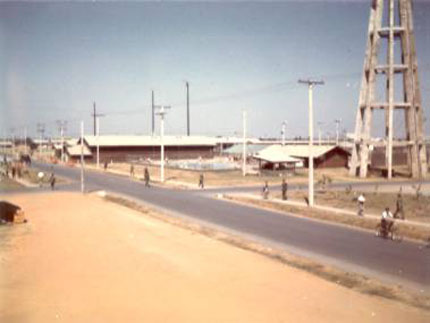 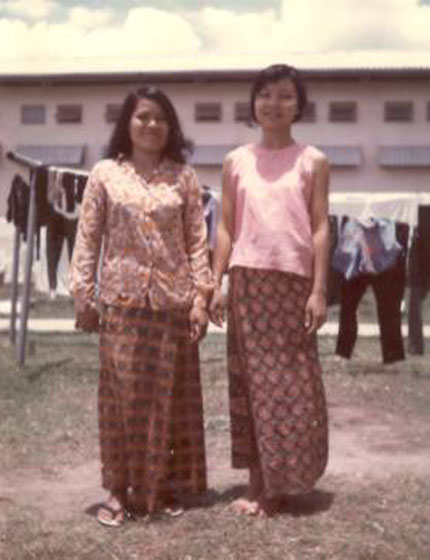 "Hootch" is the name used for "barracks." Typically, it referred to the type of barracks made with teak walls and corrugated steel roofs, not the concrete block barracks seen in these pictures—but the name stuck.

It was the job of the hootch girl to wash and iron each airman's clothes, clean his boots, and keep his area clean. Each hootch girl was responsible for two cubicles. One cubicle comprised two double bunks and four freestanding lockers. All of the washing was done by hand. The girls did the wash while they sat around a large concrete slab where water and drainage was available.

I think we each paid the girls $6 per month. We were paid only once per month so we paid them once each month. If every bunk was filled in a hootch girl's two cubicles, she made $48 each month.

This was my first hootch girl, Malee. (Her name is similar to Molly but is pronounced mah-LE, where the LE sound is very brief.) She is relatively glum here; she was usually all-smiles. When I had to move to another barracks, I had to leave her behind. But I came by often to visit her. She was very nice, very innocent. She would not tell me how old she was but my friends and I guessed that she was about 16. 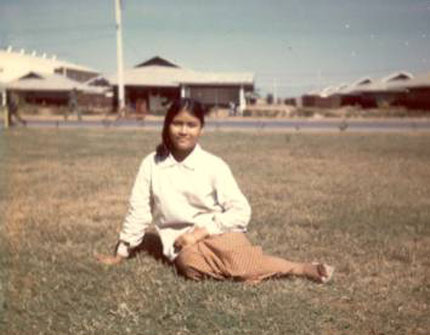