At least 3 of the crew members of my dad's B‑17 were held eventually at Stalag 17B. They were: my dad, TSgt Harold E. Penoyer, Radio Operator and Left Waist Gunner; TSgt William I. Craton, Engineer and Top Turret Gunner; and SSgt Harold A. Yorton, Tail Gunner.

What was life like for an American POW? Stalag 17B held Air Corps NCOs and was the POW camp featured in the movie Stalag 17 (1953) starring William Holden. The following sites offer accounts of life at the camp.

This is a site that offers a vivid description of life in Stalag 17B, with photographs:

Here is another interesting site:

An Aerial Photograph of Stalag 17B

This is a reconnaissance photograph of the infamous Stalag 17B. The camp was located a short distance northeast of the small village of Gneixendorf, or about 4.5 km north of the town of Krems (Krems an der Donau, Krems on the Danube, in German) and the Danube River.

Notice a hand-drawn arrow near the middle of the right side indicating North. Also notice the number "37" identifying one of the barracks. Having studied the image and compared it with satellite images from Google Earth, I am convinced that the center of the barracks area was located at coordinates 48°26'44.44"N, 15°38'5.68"E. You can load these coordinates into Google Earth or locate them on another map.

Today the coordinates identified here are near the center of a small airfield, Krems-Langenlois Airport, located roughly 4.5 km north of Krems, Austria.

Here is a link to that location in the web-based Google Earth that works only in a few browsers (Firefox, Chrome, Edge) at the present time. You can try it if yours is one of those browsers: try it. The link takes a few seconds to load and then takes you to the location. The given coordinates will be located at the center of your screen. Zoom out a little bit to get a better understanding of the lay of the land.

You can also visit this page to see the exact location of Stalag 17B using an interactive overlay. 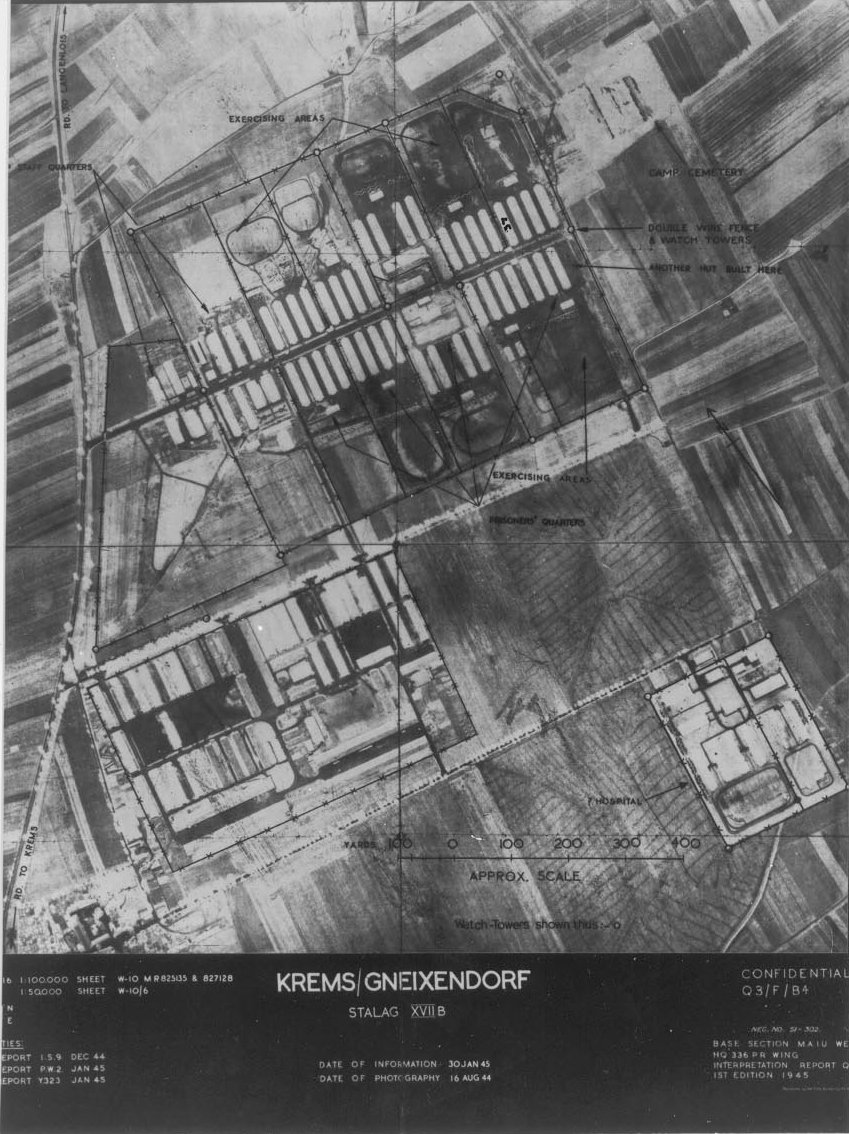 Ben Phelper and His Drawing of Stalag 17B

Ben H. Phelper was one of the American POWs at Stalag 17B. He published a book following the War titled "Kriegie Memories." It's a wealth of photographs and descriptions that vividly illustrate what life in the camp was like. The book is apparently out of print, but there is a readable online version available by clicking here. Anyone interested in the details of life in Stalag 17B should explore this book.

Mr. Phelper also created a drawing of Stalag 17B showing a lot of references, including barracks numbers. According to records in my possession, my dad was housed in barracks 18B. William I. Craton, the Engineer and Top Turret Gunner on dad's B-17, was in 35B. Ben Phelper was in 37A. The "A" and "B" might refer to opposite ends or opposite sides of the barracks. I don't know. 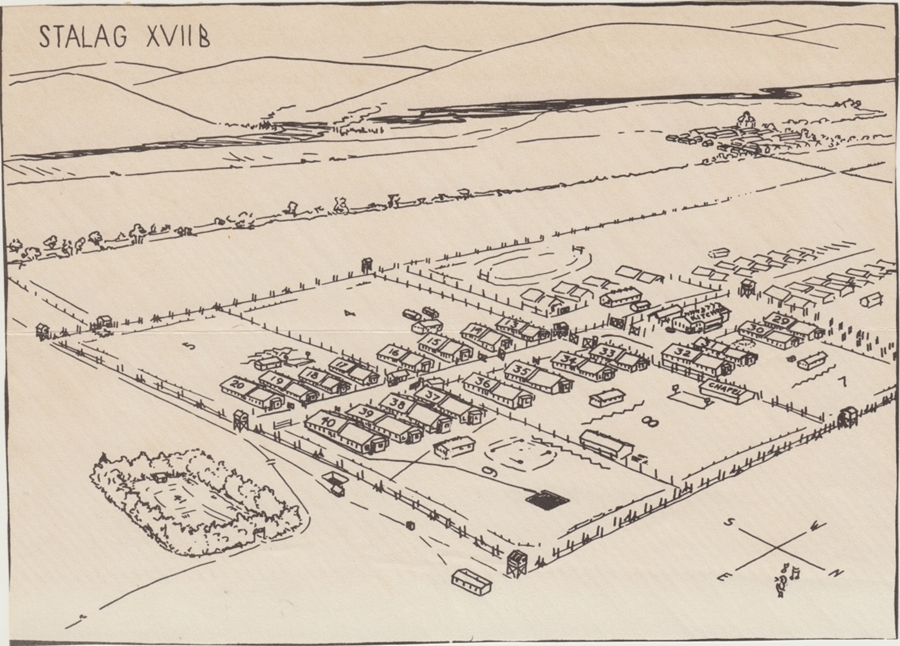 Details About the Site of Stalag 17B Today

Virtually nothing of Stalag 17B remains today. But it has been remembered by markers placed at the site. Four steel panels have been erected to mark the four corners of the camp. Another is located near the entrance to the Krems-Langenlois Airport. That panel has the word REMEMBER cut into it in the 12 languages of the prisoners who were held there. Click here for more information.

Click here for a site in German with pictures of the panels. Google Chrome and perhaps some other browsers can translate the page for you.

Finally, you can view a monument that stands next to the road that enters the airport. Click here to see the monument with a full written description.

A Map of Other POW Camps

This is a map of German prison camps. Unfortunately, it was produced from a photocopy so that it's not as crisp as you might like. However, it is relatively readable for those who are interested in the details of its contents. Simply click on the image.